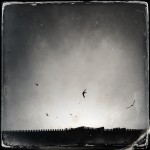 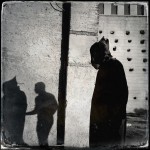 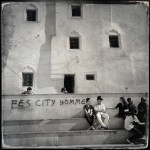 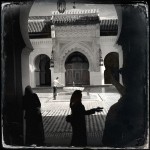 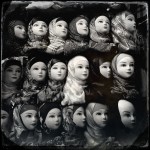 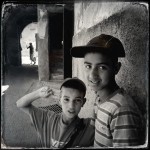 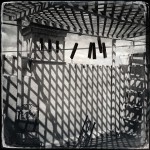 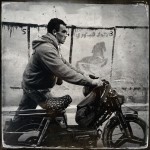 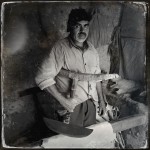 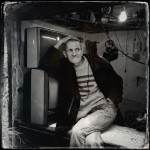 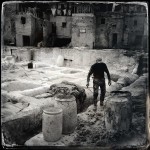 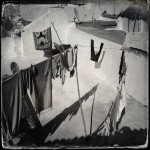 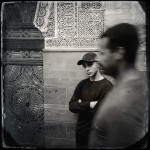 I hold in my hands a half dozen of Kevin Bubriski’s passports. Extra pages accordion out, covered with stamps of blue, green, purple and pink and scrawls in more languages than I can name. Compared to these well-worn documents, my own passport looks like a cheap fake.

Bubriski grew up in the small town in rural northwestern Massachusetts where I live; my daily walk to and from work traces almost exactly his boyhood paper route. Bubriski has since circled the globe countless times, first as a Peace Corps worker and subsequently as a journalist and photographer: Central Asia, Eastern Europe, the Middle East, the Peruvian Andes, Antarctica, and especially in Nepal, Tibet, India, Bangladesh, Burma, Korea, China, Japan, Mali and Niger. Bubriski is at once restless and highly attentive: an artist of serial fixations and enduring compassions.

Bubriski is most well known for his images of Nepal made from the 1970s to the present: the people and the dramatically changing places in the Kathmandu Valley and beyond. An retrospective exhibit at Harvard’s Peabody Museum and monograph are planned for spring 2014.

Bubriski’s portraits of spectators at Ground Zero taken days after 9/11 have been called by Richard Woodward “among the most shattering pictures to come out of the event, and the quietest” (Pilgrimage, Powerhouse Books, 2000). These images record people looking not at the photographer directly (as in most of his portraits), but elsewhere: at a scene of immediate devastation. Bubriski witnesses his subjects in intimate, at times even archaic attitudes of grief and loss and fear and incomprehension: hands held to mouths, apotropaic gestures.

My favorite work of Bubriski’s includes portraits he took in 2010 of former combatants of the Maoist People’s Liberation Army who lived until last year in holding camps in Nepal since the uneasy peace accord of 2006 after over a decade of civil war (Maobadi, Himal Books, 2011*).

Bubriski speaks lightly about his artistic influences and the tools of his trade. He has used a tripod-mounted, large-format, single lens reflex Canon Mark II camera, a medium format Hasselblad camera with 120mm black and white film, small digital cameras, and more. He cites among his inspirations Josef Koudelka, Cartier-Bresson, Diane Arbus, August Sander “and so many others.” Bubriski embraces the new image-making technologies, “though they make me wonder what a photograph is anymore.” He loves Instagram (“kevinbubriski”) and peruses it for about 30 minutes a day “to keep in touch.”

In May of 2013 Bubriski made a trip to Fes, Morocco using a camera that is smaller than one of his passports: his iPhone. The images above are drawn from a portfolio of 116 black and white digital images that will find their way eventually onto paper. The medieval walled city of Fes-al-Bali, population just over 150,000 (according to CarFree “probably the largest contiguous, car-free area in the world”) is regularly featured in the New York Times travel section, one of the few Muslim cities in which tourism thrives. Bubriski arrived in Fes directly from Algeria where he was recording images of the Algiers Casbah. In Algeria he traveled as a journalist: “There is little tourism in Algeria,” Bubriski said, flatly. “The Casbah is a very haunting place,” he said, recounting for me the effects of the violent occupations and wars and neglect to which his photographs bear witness. “When I got to Fes from the Algiers Casbah I went from a place of quiet fading beauty to something vibrant and breathtakingly alive.”

Bubriski’s either/or formulation belies the subtle wonders of his work. As a photographer Bubriski is extraordinarily attuned to the vitality present in even the most deprived peoples and decimated places. His decision to record the Kodacolor extravagance of Fes (whose roof-top tanneries with basin after basin of brilliant dyes is a favorite photographic subject) in black and white opens our eyes to Bubriski’s depth of vision. Through Bubriski’s lens we see beyond Fes as a destination kept exotic and made safe for touristic consumption.

Twice in this piece I’ve used the phrase “peoples and places,” and both times I’ve felt its inadequacies. The neutral yoking of peoples and places oversimplifies the relation revealed in Bubriski’s images. Bubriski has written that his images of Nepal in the 1980s “express the delicate edge of survival and subsistence on which lives were precariously balanced.” His subjects enact such subsistence and survival upon and in direct concert with the lands and built environments they occupy and traverse. These edges and layers of habitation and use are the substance of Bubriski’s work.

In a black and white plate from Portrait of Nepal Bubriski photographs the blind mother of a trader and yak herder crouching outside her home. Her age is unreported, but she appears very old. She is wrapped in a dark woven blanket, so that only her face and white hair may be seen; her eyelids are closed, her mouth is slightly open, her deeply wrinkled skin catches light, her face is tilted slightly to the side and angled toward the camera. She perches on a thick wooden plank worn smooth with use. On the plank just behind her, the edge of an inverted metal pan gleams. Beneath the plank are dry grasses; under its corner three large stones of motley size, shape and color are balanced one upon the other to support the plank. The wall of the building behind the woman is a geometrically complex composition of vertical wooden posts and fine, flat layers of stone, mud and wood. Bubriski’s image records in a single frame the extraordinary convergence of animate materials and substances: the living human and those tissues and objects upon which and by which that human depends. Bubriski’s image, in turn, brings the viewer into into the purposeful ambit of this all-encompassing materiality: tripod-mounted camera and ground glass plate open the way to wood, stone, grass, mud, tin, cloth, skin, flesh. Bubriski both witnesses and imagines this woman and her world, and beckons us to do likewise.

Robert Gardner speaks to the dual property of photographs such as Bubriski’s that both document and create; these photographs express “the ability to register the actual and the affinity for the possible.” Bubriski’s work expresses both the what is and the what if: a simultaneous love of shadows and of the bodies and objects that cast them, a sensitivity to human subjects and to abstract geometries of worked land and cityscapes.

The short poem in which William Carlos Williams wrote the often-quoted parenthetical lines “(No ideas/but in things)” begins:


Let the snake wait under

be of words, slow and quick, sharp

to strike, quiet to wait,

— through metaphor to reconcile

the people and the stones.

Slow, quick, striking and patient, Bubriski’s images work as metaphor in the urgent sense that Williams means: at once witnessing the rapport between man and blade and animal skin, or between a djellaba-cloaked figure and its shadow, and making possible an accord between the viewer of an image and its human and material subjects.


*100% of the proceeds of the sale of Maobadi go toward the development of medical field camps in remote villages of northwestern Nepal.

You can see more of Kevin Bubriski’s work in “The Casbah of Algiers: Endangered Ark”

Kevin Bubriski’s photographs are in the permanent collections of the Museum of Modern Art and Metropolitan Museum of Art. He is the recipient of Guggenheim, Fulbright, NEA, and Robert Gardner Peabody Museum Visiting Artist fellowships. His books include Portrait of Nepal (1993), Pilgrimage: Looking at Ground Zero (2002), and Nepal Photographs 1975-2011 (Radius Books and Harvard University 2014).